SACRIFICE DOES NOT MEAN A BORING WORK
By Alexandra – October 18th, 2010

We are used to apply the word “sacrifice” to something we don’t want to do because it’s hard or painful or boring but that we do for the sake of someone or something. Then most of us take this same view of a sacrifice when it has to do with religion, but, well, we should not do it. Sacrifice can be a very pleasurable thing. And it’s the base of any belief. A lot of scholars agree that there isn’t religion without sacrifice, that it’s one of the main actions on faith, the most perfect expression of the communication between gods and men, between the spiritual and the material world. Why is that?

First of all, let’s see from where this word comes from. It’s different in Greek and Latin-basis languages. For us in Brazil, sacrifice comes from the Latin “sacer-facere”, “to make sacred”, a process by which something profane becomes holy when it is given to a deity. (Curiously, some writers think that the sacrifice does the opposite, it would turn the sacred creation into a profane food so it can be consumed without offending the deities.) The Greek verb to sacrifice is “thyein”, “to make smoke”, the smoke which rises from the burning offering and goes to the gods through the air. This something is usually a valuable thing, and that’s why we had animals being offered, since they were kind of expensive in ancient times.

Following the principle of “kharis” and the contractual idea of “I give you so you can give me”, sacrifice is commonly defined as something that makes you get the favor of a deity. Even when we sacrifice to our ancestors or “daimons”, it is also a way of dialogue, allowing their spirits to communicate with the living human beings.

And, since we are talking about life and death, it’s interesting to note that the sacrifice has something to do with something dying. Some cultures believed that we need to balance the world promoting death to obtain life, killing things to get fertile crops growing and so on, besides the warriors seeing death as a rite of passage. But it goes beyond a natural balance. When we study a lot of tribes spread around the world and some traditions with mystery cult, we see the sacrifice as a way of symbolically immolate the deity to remember his/her shredding myth (like Dionysos, Osiris etc) and to assimilate the divine by eating of his/her body and blood represented by the food and drink. The deity turns into a lot of little pieces and becomes accessible to everyone who joys the sacrificial rite. These pieces are not only parts of the gods in us, but the whole deity, since each part holds the same substrate of the entire god or goddess.

We can also see that this food can be a plant grown from the buried body of the god, not only an animal or human. For example, the first-fruits offering could mean that the energy in the crop is the youth of the deity, in all his/her splendor, something indeed very sacred. Although people think that only death and destruction can be called a sacrifice – while fruits and flowers would be known as offerings, fruits and flowers are also losing their life detached to the tree or soil, grains are also dying to give place to the vegetable they’ll become, so it’s genuinely a sacrifice, and not only for this reason. Keep in mind that the sacrifice in Greek is the smoke, and that the gods don’t need to eat food to live, so anything valuable could be burnt on fire to produce such smoke.

There’s a statement of an East-Central African pygmy to an anthropologist that reminded me a lot about our way to worship Hestia when I read it. He says that, when he kills a buffalo, he takes the best piece and puts it on fire, burning a part and eating the remaining parts with his family. He also says that, when he finds honey, he throws a little on the forest and in the sky before serving himself of it. And, if he has wine, he pours a little of it in the earth. When he does such things, the following prayer is said: “Waka, you gave me this buffalo, this honey, this wine; here goes your share of it. Give me strength and life, and don’t allow that anything bad happens to my children”. He told the scholar that Waka is the owner of everything, of the earth, of the forests, of the rivers.

What I wanted to show by quoting this native is that there’s a kind of preparation of everything we are going to use that comes from the deities, otherwise every rite would be a sacrilege/profanation, since we are transposing the limits that separates us from the gods. The sacrifice prepares this transition, slowly and gradually introducing the person into the space of sacred things. It’s like cooking to get a better, healthier and tastier meal.

Now we are finally reaching where I wanted to go with you: the sacrifice as a feast. And a feast where doesn’t matter if you serve meat or vegetables or grains, the most important is to be with the gods. The heart of a sacrifice is the spiritual element, and not the straight external and material lines that most people think, not the hard and boring and painful work to get something done. It’s not only giving something as a tribute to honor a superior deity as a lot of religions do in a servile way. Have you noticed how sacrifice involves foods and drinks? What do we do in our modern society with it? What does mean to sit at a table with your folks? Doesn’t it usually mean you are hosting these people as part of your family or clan? If you go deeper in academic studies about it, sharing a meal has to do with sharing the same flesh and blood. So, feasting with the gods declares our kinship connection/relation with them. In this way of view, sacrifice would not be an act of resignation, but an act of communion. And it’s not only seating at a table with the deities, but sharing a sacred meal with them. It’s pleasurable. It’s valid to any meal we share, not only that which we killed and cooked ourselves.

Staying in the tradition, I’ll finish this article with a libation. Remember that libations introduce and conclude any sacrificial act and ritual. Even the gods were depicted in pottery pouring libations. It’s a kind of a polarity that balances with the blood sacrifice. Members of the ancient polis used to make libations to set they had solved something and committed themselves. Libations proclaim a truce, since they are “bloodless, gentle, irrevocable and final” (Burkert). So, we could end this text by committing ourselves to the gods that we will have more opportunities to feast with them and to make them sacrifices for the sake of the religion we share. I hope it helps to keep our beliefs alive.
References:
• Emilio Durkheim – Las Formas Elementares de la Vida Religiosa (1968)
• Jon D. Mikalson – Ancient Greek Religion (2005)
• Sarah Kate Istra Winter – Kharis: Hellenic Polytheism Explored (2004)
• Waldomiro O. Piazza – Introdução à Fenomenologia Religiosa (1976)
• Walter Burkert – Greek Religion (1985) 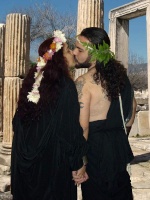